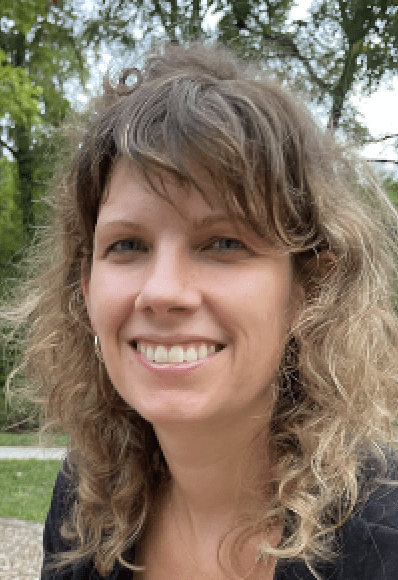 Margaret Johnson is an Associate Professor in the Department of Biophysics, which she joined in 2013. She received her B.S. in Applied Math from Columbia University and her PhD in Bioengineering from UC Berkeley. She completed her postdoc in the Lab of Chemical Physics at the NIH.  Her multidisciplinary research group studies dynamical systems in biology. Margaret's group addresses how macromolecular self-assembly is controlled to occur at the right place and time, with focus on endocytosis, viral exit, and transcriptional regulation. Group members are interested both in principles and design of self-assembly, as well as biological function in cells. They develop and apply theory, modeling, and simulations to these problems, with frequent collaboration with experimentalists. Margaret has received an NIH Pathway to Independence Award, an NSF CAREER Award, and an NIH MIRA Award.

Cells are complex dynamical systems, operating out-of-equilibrium. How do the many components within the cell self-organize and assemble at the right place for proper biological and mechanical function? To study these complex systems, we simulate networks of many interacting components, and construct simplified models that are amenable to analytical theory. We use and develop modeling techniques from physics, chemistry, and engineering, including molecular models for thermodynamics, reaction-diffusion models for stochastic dynamics in cells, and continuum models for coupling to mechanics. We are interested in principles and design of optimal self-assembly, as well as the development of predictive models for cell biological processes. The dynamics of self-assembly in the cell are challenging to simulate due to their dependence on fast molecular motion and slow collective dynamics, along with coupling to energy-consuming reactions. The reaction-diffusion methods developed in our lab enable simulations inaccessible to existing software tools, with broad applications in cell biology and engineering design.

Two fascinating examples of macromolecular self-assembly in cell biology are clathrin-mediated endocytosis (CME) and virion formation during HIV infection. In both cases, proteins assemble into a spherical structure that is required to perform the work to remodel the membrane into a vesicle, either for transport in (CME) or out (viral budding) of the cell.  Understanding the control and spatio-temporal dynamics of these assembly problems coupled to membrane bending is a shared theme of both our research projects that allows us to learn from each other and apply similar methodologies.

Clathrin-mediated endocytosis is occurring persistently within our cells, performing transport of essential nutrients such as iron into our cells, and clearing receptors at our neural synapse. It involves coordinated assembly of dozens of different protein components, and viral infection or neurological disorders can result from its dysfunction. Our research has shown how localization to the membrane can dramatically enhance assembly of even very weakly interacting partners via dimensionality reduction from 3D to 2D, which effectively concentrates components and promotes binding. At the systems level, we have quantified how the stoichiometry of the network of protein and lipid components involved in CME can sensitively tune the speed or success of vesicle formation, highlighting again the central role of membrane localization in triggering protein assembly. Ongoing research in our lab is focused on predicting the timescales of binding in and on the 2D membrane, mechanical feedback between membrane binding and bending, and timescales of receptor and cargo uptake. We are broadly interested in how key features of dimensionality and component stoichiometry control assembly in CME, virion formation, and other cellular pathways.

AS. 250.302 Models and Algorithms in Biophysics