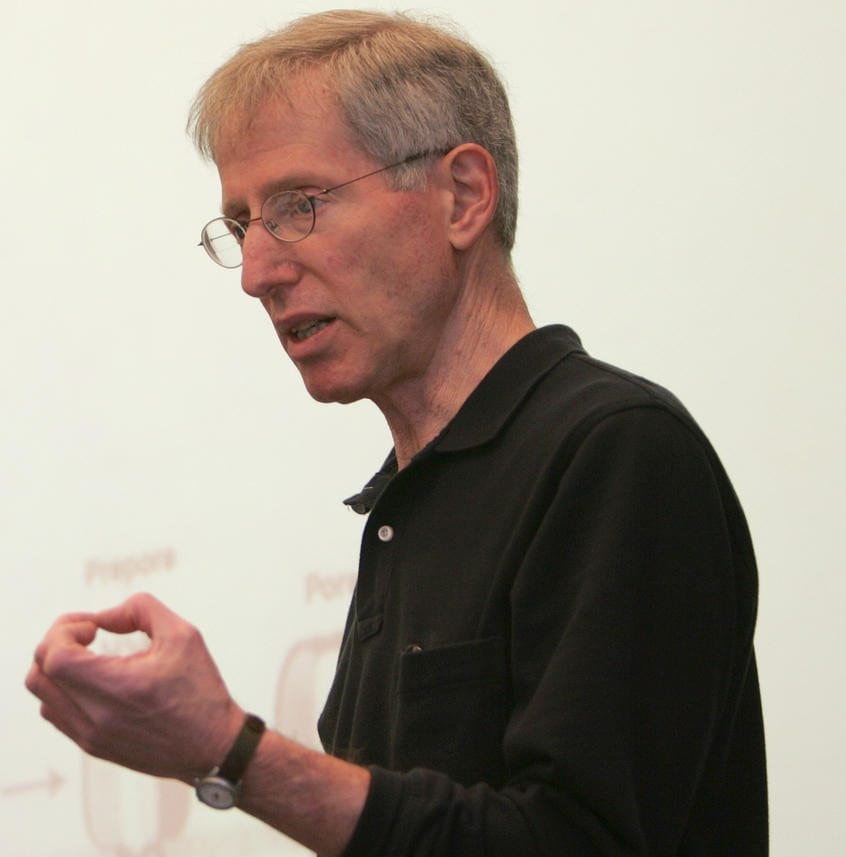 For a globular protein, function follows form. Under physiological conditions, many proteins undergo a spontaneous disorder ⇌ order transition called folding. Most proteins self-assemble spontaneously in water with a little salt at physiological temperature. The molecular mechanism responsible for this self-organization process remains an open question – perhaps the most fundamental open question in biochemistry.

Our research is focused primarily on protein folding, the spontaneous disorder ⇌ order transition that occurs under physiological conditions. The protein polymer is flexible when unfolded but adopts its unique native, three dimensional structure when folded. Current experimental knowledge comes primarily from thermodynamic measurements in solution or the structures of individual molecules, elucidated by either X-ray crystallography or NMR spectroscopy. From the former, we know the enthalpy, entropy, and free energy differences between the folded and unfolded forms of hundreds of proteins under a variety of solvent/cosolvent conditions. From the latter, we know the structures of approximately 100,000 proteins, which are built on scaffolds of hydrogen-bonded structural elements, α-helix and β-sheet. Anfinsen showed that the amino acid sequence alone is sufficient to determine a protein’s structure, but the molecular mechanism responsible for self-assembly remains a fundamental open question in chemical biology. ("A backbone-based theory of protein folding" Proc Nat. Acad. Sci. 103: 16623-16633.)

A protein backbone has two degrees of conformational freedom per residue, described by its φ,ψ‑angles. Accordingly, the energy landscape of a blocked peptide unit can be mapped in two dimensions, as shown by Ramachandran, Sasisekharan and Ramakrishnan almost half a century ago. With atoms approximated as hard spheres, the eponymous Ramachandran plot demonstrated that steric clashes alone eliminate ¾ of φ,ψ‑space, a result that has guided all subsequent work. Here, we show that adding hydrogen-bonding constraints to these steric criteria eliminates another substantial region of φ,ψ‑space for a blocked peptide; for conformers within this region, an amide hydrogen is solvent-inaccessible, depriving it of a hydrogen-bonding partner. Yet, this "forbidden" region is well populated in folded proteins, which can provide longer-range intramolecular hydrogen-bond partners for these otherwise unsatisfied polar groups. Consequently, conformational spaceexpands under folding conditions, a paradigm-shifting realization that prompts an experimentally verifiable conjecture about likely folding pathways. ("Redrawing the Ramachandran plot after inclusion of hydrogen-bonding constraints" Proc. Nat. Acad. Sci., 108:109-113.)

Protein domains are conspicuous structural units in globular proteins, and their identification has been a topic of intense biochemical interest dating back to the earliest crystal structures. Numerous disparate domain identification algorithms have been proposed, all involving some combination of visual intuition and/or structure-based decomposition. Instead, we present a rigorous, thermodynamically-based approach that redefines domains as cooperative chain segments. In greater detail, most small proteins fold with high cooperativity, meaning that the equilibrium population is dominated by completely folded and completely unfolded molecules, with a negligible subpopulation of partially folded intermediates. Here, we redefine structural domains in thermodynamic terms as cooperative folding units, based on m-values, which measure the cooperativity of a protein or its substructures. In our analysis, a domain is equated to a contiguous segment of the folded protein whose m‑value is largely unaffected when that segment is excised from its parent structure. Defined in this way, a domain is a self-contained cooperative unit, i.e., its cooperativity depends primarily upon intrasegment interactions, not intersegment interactions. Implementing this concept computationally, the domains in a large representative set of proteins were identified; all exhibit consistency with experimental findings. Specifically, our domain divisions correspond to the experimentally-determined equilibrium folding intermediates in a set of nine proteins. The approach was also proofed against a representative set of 70 additional proteins, again with confirmatory results. Our reframed interpretation of a protein domain transforms an indeterminate structural phenomenon into a quantifiable molecular property grounded in solution thermodynamics. ("A thermodynamic definition of protein domains" Proc. Nat. Acad. Sci., 109: 9420-9425.)

Osmolytes are small organic compounds that are ubiquitous in living systems. In the equilibrium protein folding reaction, U(nfolded) ⇌ N(ative), protecting osmolytes push the equilibrium toward N while denaturing osmolytes push the equilibrium toward U. As yet, there is no universal molecular theory that can account for the mechanism by which osmolytes interact with the protein backbone to affect protein stability. Here, we lay the groundwork for such a theory, starting with a key observation: the transfer free energy of protein backbone from water to a water:osmolyte solution, ΔGtr, is correlated with an osmolyte’s fractional polar surface area. ΔGtr measures the degree to which an osmolyte stabilizes a protein. Consequently, a straightforward interpretation of this correlation implies that the interaction between the protein backbone and osmolyte polar groups is more favorable than the corresponding interaction with non-polar groups. Such an interpretation immediately suggests the existence of a universal mechanism involving osmolyte, backbone and water. We test this idea by using it to construct a quantitative solvation model in which backbone:solvent interaction energy is a function of interactant polarity, and the number of energetically equivalent ways of realizing a given interaction is a function of interactant surface area. Using this model, calculated ΔGtr values show a strong correlation with measured values (R=0.99). In addition, the model correctly predicts that protecting/denaturing osmolytes will be preferentially excluded/accumulated around the protein backbone. Taken together, these model-based results rationalize the dominant interactions observed in experimental studies of osmolyte-induced protein stabilization and denaturation. ("A molecular mechanism for osmolyte-induced protein stability" Proc Nat. Acad. Sci. 103: 13997-14002.)