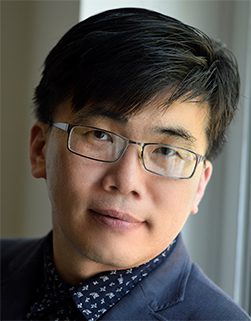 PhD, University of California at Berkeley

Dr. Taekjip Ha is a Bloomberg Distinguished Professor of Biophysics and Biophysical Chemistry, Biophysics, and Biomedical Engineering at Johns Hopkins University School of Medicine. He is also an investigator with the Howard Hughes Medical Institute. He uses sophisticated physical techniques to manipulate and visualize the movements of single molecules to understand basic biological processes involving DNA and other molecules.  His study is focused on pushing the limits of single-molecule detection methods to study protein–nucleic acid and protein-protein complexes and the mechanical basis of their interactions and functions – both in vitro and in vivo – that are important for genome maintenance.

Dr. Ha received his undergraduate degree in Physics, from Seoul National University, Seoul, Republic of Korea in 1990.  He earned his Ph.D. In Physics from the University of Berkeley in 1996. After postdoctoral training at Stanford University, he was a Physics professor at University of Illinois at Urbana-Champaign for fifteen years until 2015.

Dr. Ha serves as a member of Editorial Boards for Science, Cell, eLife, PRX, Structure, PCCP, Physical Biology and Cancer Convergence. He is a member of the National Academy of Science and an elected fellow of the American Academy of Arts and Sciences.

Our research is focused on pushing the limits of single-molecule detection methods to study complex biological systems. We develop state-of-the-art biophysical techniques (e.g., multicolor fluorescence, super-resolution imaging, combined force and fluorescence spectroscopy, vesicular encapsulation, single-molecule pull-down) and applies them to study diverse protein-nucleic acid and protein-protein complexes, and mechanical perturbation and response of these systems both in vitro and in vivo.