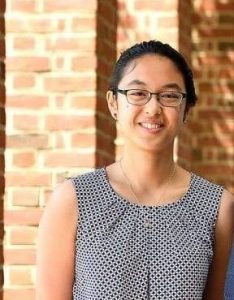 One of three Hopkins students named Goldwater Scholars: Kathy Le is a first-generation college student studying biophysics, a discipline the junior says has the potential solve some of the world’s greatest biomedical problems.

In the lab of Erika Matunis at the School of Medicine, Le has researched stem cell competition in the Drosophila melanogaster testis to better understand how genetic mutations cause competition and relate to the paternal age effect, in which children of older fathers are more likely to have genetic disorders. By looking at factors that make some mutations advantageous, she is working to develop screening for competitive mutations that cause PAE disorders.

She plans to earn a PhD in biophysics, after which she will devote her research to the less well-characterized biophysical aspects of stem cell processes, to manipulate their behavior for biomedical applications.